At Crazy Rays Adventures is excited to announce a new Alaska Eco Tour schedule departing from Whittier. Our experienced captains know several areas where whales frequent and we can facilitate getting you to the areas where they are commonly found. Our Alaska eco tour trips in Prince William Sound are available as an exclusive tour only however many marine mammals are seen on standard fishing trips. 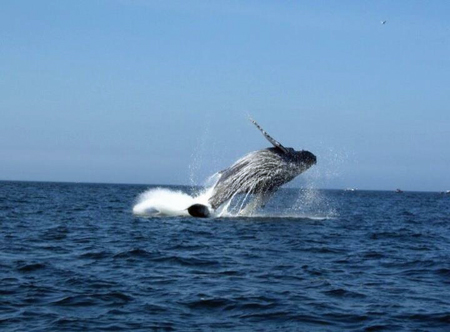 Humpback whales are found all throughout Prince William Sound and the Gulf of Alaska. It is not uncommon to see them on an Alaska eco tour or while we are traveling to our fishing destinations on almost a daily basis. The sound has such a large bio-mass of feed for them that they are even beginning to winter over and there is an estimated 40 whales that do not migrate any more.

Humpback whales feed on zooplankton primarily but they also feed on herring, capelin, and sand lance. Prince William Sound is a summer feeding ground for them to get fattened up before making the great journey to the breeding and calving grounds in Hawaii and a few end up off the coast of Mexico. Bubble feeding is not a known technique for humpback whales to use in south central Alaska however we have witnessed this behavior a few times. Humpback whales typically begin to have offspring at around 10 years of age and we have seen numerous cows with calves while on a tour. 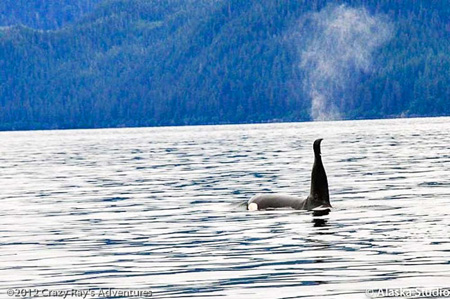 Killer whales are prolific in Prince William Sound and there are 18 pods that frequent the area and 2 additional transient pods. They are spread out through the Sound and often move into the Gulf of Alaska to feed. Most of the pods avoid feeding on marine mammals however and are largely fish eaters. When foraging on marine mammals, harbor seals are a popular choice.

A wide variety of fish such as all 5 species of salmon, herring, and even halibut at times can be on the menu. We often encounter killer whales in Passage Canal early in the spring because there is large quantities of baitfish in that area. The next most common area is around Hinchenbrook Entrance to the East. While on our charters we have noted that Killer Whale sightings and encounters occur about once per week. It is definitely a real treat when we see them. One time while fishing for halibut on anchor, we had a large pod swimming around us, and a huge bull killer whale killed a salmon shark right behind the boat. What a treat that was to see, it was like watching National Geographic but in real life. We also observe quite a few of them while fishing in our trolling grounds for king salmon and it appears they like to feed on them as much as we do.

Go on an Alaska Eco Tour with Crazy Rays Adventures 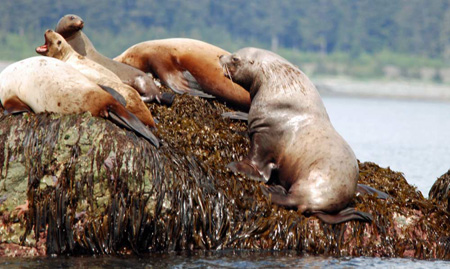 Stellar sea lions are very common in Prince William Sound and we see them sometimes right in Whittier. Sightings near town are more frequent in the spring when there is more feed in Passage Canal and then they seem to migrate out for a bit returning when the salmon begin congregating in the bay again in the later part of the summer. We know of several stellar sea lion haul out areas and even a few coast guard navigational buoys that they like to lay on when the sun is shining. On an Alaska eco tour or while fishing, we would take you by some these known areas in search of them. Stellar sea lions feed primarily on salmon when they are available and they can often be seen tossing them in the air like a toy. I guess they like to play with their food a bit before eating it.

Herring, capelin, pacific cod, Pollock, rockfish, sand lance, and even halibut are also added to the menu. One time while fishing on anchor close to the coast we had a large bull stellar sea lion come right up to the boat sniffing around at a large halibut we had just brought to the surface. I can’t be sure but I believe he intended on taking it home with him. We made sure to get the halibut in the boat as quick as possible to say the least. Stellar sea lions seem to be quite social and are not afraid to swim up to the boat and check things out. Most seem to be friendly and don’t portray aggressive behavior. 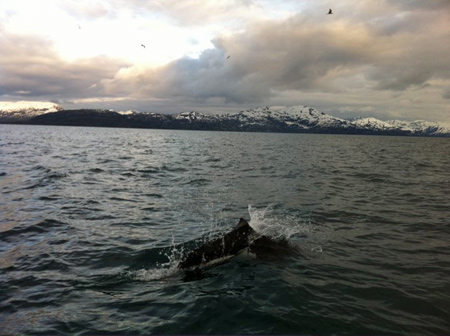 Dall’s Porpoise are very common in Prince William Sound and they can be seen most days while traveling through the sound on our Alaska eco tour or while fishing. Often we throttle the boat back to where we are cruising at about 10 knots and the dall’s porpoise will begin swimming right alongside the boat and also diving back and forth in the bow wake. It makes for incredible photos and even first class videoing opportunities. We have shot numerous videos of this behavior and it is a real treat.

Dall’s porpoise are commonly observed while on an eco tour of the Sound and even sometimes while on anchor fishing. They rival the killer whale as one of the fastest mammals in the Sound and their marking are even similar, which can cause people to mistake them for killer whales at a first glance. They feed heavily upon what we call baitfish, which is herring, capelin, and sand lance. You have to use some caution while fishing because if a pod begins swimming around the boat they could become entangled in the gear. We have our clients reel up their lines until the porpoise leave to prevent this. 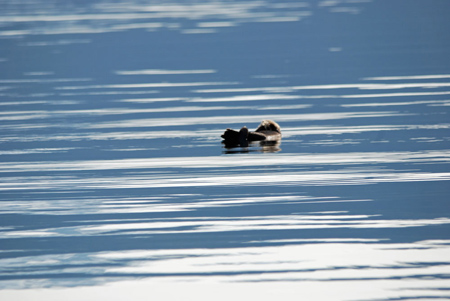 Sea otters are very abundant in Prince William Sound and they can be seen on most days while traveling throughout on an eco tour or while on a normal fishing trip. They are more frequently seen while closer to Whittier inside Passage Canal, however there are a few areas closer to the Gulf of Alaska that they can be seen in large numbers as well. Sea otters feed heavily upon small crustaceans and shellfish. You can witness them many times lazily floating on their backs enjoying a nice dungeness crab or clam.

While on an eco tour or while fishing we see them many times floating in large groups and they usually are quite social allowing us to approach to a safe distance and get pictures and video. Sea otters live in Prince William Sound year round they can be seen with their pups frequently. We have nicknamed the mothers “Carriers”, because they have their pups on their bellies sleeping most of the time. They have very few predators and excellent habitat in the Sound so their population is very healthy. 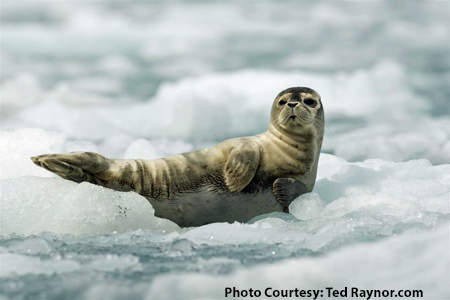 Harbor seals are abundant in Prince William Sound and they are often seen while on an eco tour or on a regular fishing trip. There are known areas that we frequent where they haul out to lay on the rocks and enjoy the sun.

Harbor seals feed heavily on crustaceans, mussels, and shrimp and the Sound provides an excellent feed source and habitat for them to thrive. They have a few predators in the Sound, sleeper sharks, killer whales, and Native Alaskan’s all hunt for them at times. The population is healthy though and sightings occur often.

They are more reclusive when in the water dipping below the surface and disappearing when approached but when they are on the rocks they pretty much just lay there lazily not in a hurry to move.

Birding on an Eco Tour 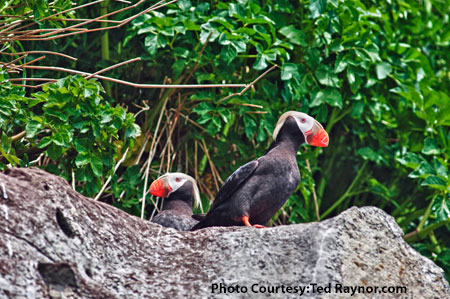 There are 2 types of puffins commonly found in Alaska and they both reside in Prince William Sound. On Crazy Rays Adventures eco tours we can take you birding to see a puffin rookery that we know of.

We do however see puffins on a frequent basis while traveling through Prince William Sound to our fishing destinations. The 2 types of puffins that we commonly see are tufted puffins and horned puffins. We call the tufted puffins Rock Stars as they have an elaborate blonde colored Mohawk on top of their head.

Puffins feed primarily on zooplankton throughout the winter months and then on baitfish consisting of herring, capelin, and sandlance during the summer. There are many different kinds of Sea Birds in Prince William Sound and we can facilitate getting you to where they are.

Prince William Sound has numerous glaciers and fjords that can be observed during an eco tours and we pass by many of them while on our daily fishing adventures. Some of the more popular glacial viewing areas are inside Harriman Fjords where multiple glaciers can be viewed at one time. You can experience the thundering sound that comes from actively calving glaciers. 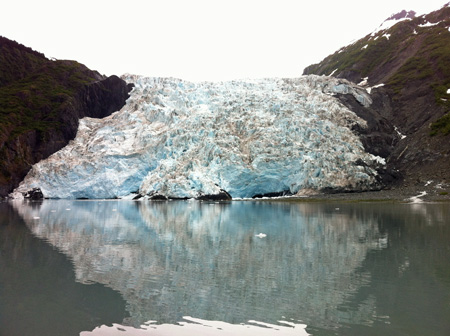 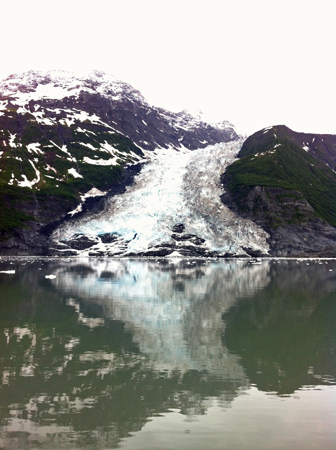